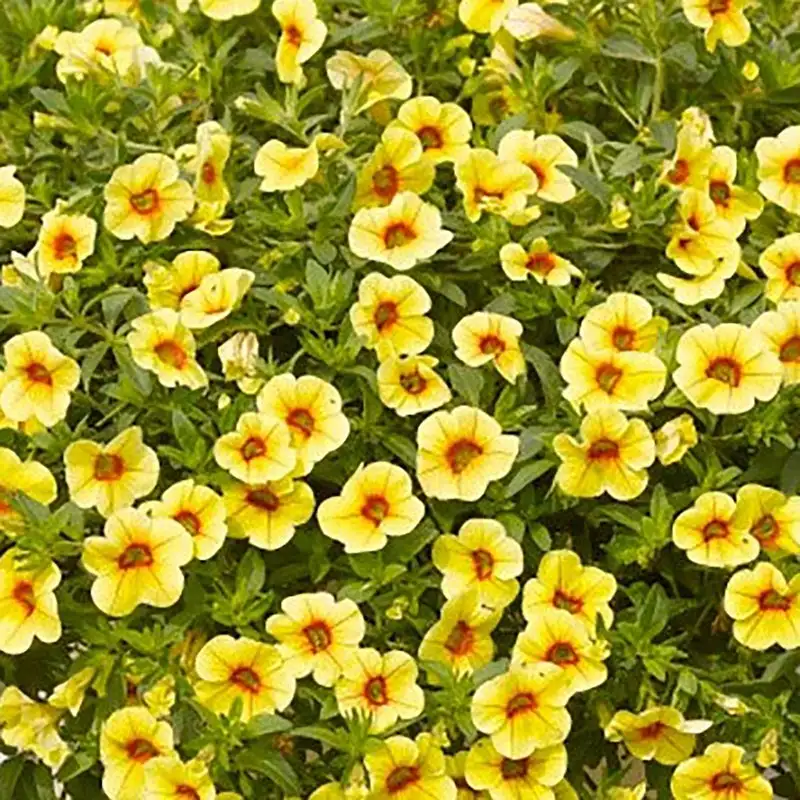 I believe I have Calibrachoa Aloha Kona Pineapple. I could be wrong.  Susie and Sue identified it last post as a Calibrachoa  without seeing it, just from my description. I looked it up and found this picture above. I like them. So pretty and bright.

Wednesday, I went shopping but was still exhausted from the "event" so just shopped at Publix. Thursday, I went to Piggly Wiggly and needed a stop at Publix.

zucchini--forgot what I paid but not on sale

The pork butt roast had more fat than I had ever seen on a piece of meat, so I left them at The Pig. On the way home, we stopped at Publix and I got two pork roasts there, much less fatty. Kraft cheese was bogo there, so two for $4.49, making each $2.25.

When we got home, I put one pork roast in the crock pot and it will probably stay there until Friday morning, maybe not. The other is in the refrigerator until I can slice it in half and freeze. Or, maybe I will cook it and freeze. I have not decided. I bought 5 beautiful ears of corn 5/$2. I have called this Peaches and Cream, so I don't know if their name of bi-color is the same corn. Do you know?

I have been dizzy since about 3 pm. I think I forgot to take shot for diabetes. I was dizzy in the kitchen, lurched about and my left knee moved wrong, gave out and hurt. So, Tommy got to put the roast in the crockpot and bring me a glass of milk. Well, it was in the pot but I had him cut off the huge layer from the bottom. Do you cut that off? At The Pig there was two inches on each roast. The marbling was horrendous.

Thursday evening, my mentor in the gardening program called and apologized for not coming over to speak to me. I had been embarrassed I had not gone speak to her. I think we were hurrying off to get the goodies. She won a hanging flowerpot, too. And, she managed to snag other plants and bags of soil, amongst other items.

Okay, I think Peaches and Cream Corn is a bi-color variety.

After the "event," I found a 13 lb box of books from a friend. Tomorrow, I will tell you about that.

I asked Tommy if he wanted our Memorial Day meal then or just eat it until then. He said to wait. I mentioned the pork roast and bbq the meat, cole slaw, and corn on the cob. He was so happy and said that sounds like enough. It is settled. If I can find the can of pork and beans, I may surprise him with baked means. I make really good baked beans. I only keep one can of pork and beans on the shelf as it is not something I make for myself.

We have been gone out of town. It was not a fun or exciting adventure, just business. However, we did stay overnight and I had my first sho...